Below is a screenshot of the FoxNews.com homepage taken at 3:59pm Eastern Daylight Time on October 31, 2008. This is the area that is "above the fold" and viewable by most visitors without scrolling in their browser. The page is unaltered except for the advertisement being removed and the color overlays which indicate: 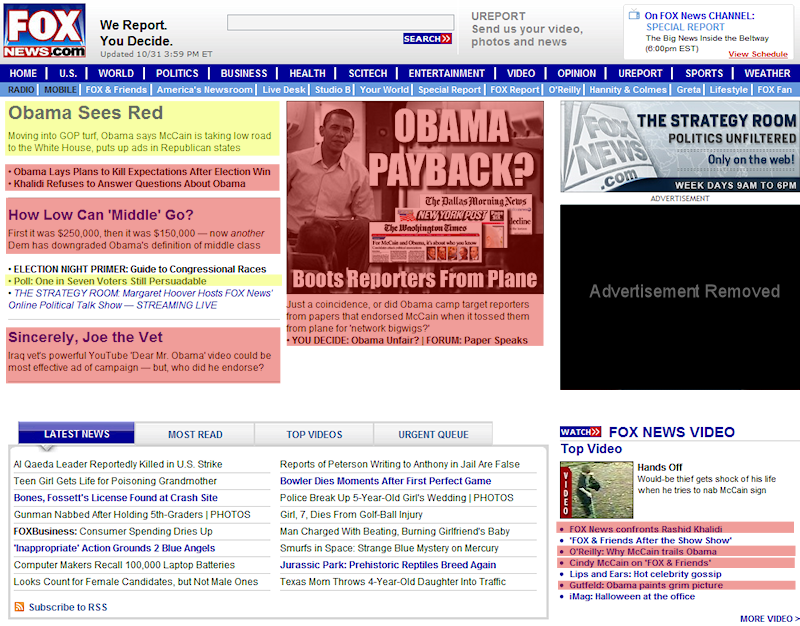 Fox News has been criticized for unfair reporting so often that they've earned the nickname "Faux News: We Distort, You Comply", a play on their Fox News: We Report, You Decide tagline. Some have said that they simply don't report all the news. A more accurate statement is that Fox News does actually report on all news: You'll find negative McCain and Palin coverage on the site and in the story archive. What they don't do is feature it as prominently or for as long on their homepage when they do post these stories. And they keep negative coverage on Obama on their homepage for as long as possible. Even doing followup stories on older revelations, even ones that have been debunked by other news organizations as well as the non-partisan FactCheck.org. As a general rule, all stories and commentary are slanted with a pro-Republican bias for a number of reasons...

Fox News has a fairly well known political bias. John Moody, Senior Vice President, News Editorial for Fox News, has issued internal memos that show a top-down pressure for the channel to have a pro-Republican bias. Additionally, former White House Press Secretary Scott McClellan has stated publicly that George W. Bush's White House has routinely given talking points to Fox News commentators. In 2004, a documentary film entitled Outfoxed: Rupert Murdoch's War on Journalism was released which reveals much of this bias in first-hand accounts from former anchors, producers and employees of Fox. Over the years, there have been a number of controversies at Fox News that simply shouldn't happen within a professional news organization.

The bottom line is that, if you actually want to get "Fair and Balanced" reporting, you need to be watching, listening to or reading from a variety of news sources from the United States and around the world. That list could include Fox News, but any stories published or promoted by them should be read with the understanding that they are published with a purposeful pro-Republican bias, rather than an attempt to accurately portray people or events.