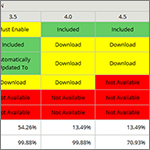 UPDATE May 10, 2014 - It seems I missed out on the fact that apps can be set to have multiple later supportedRuntime versions listed.  So, KeePass 2.0, for example, includes 4.0 and 4.5 as supported runtimes in its .config file, even though it's a .NET 2.0 app.  By doing so, KeePass 2.0 will run on Windows 8/8.1 out of the box without issue.  While this doesn't change the overall issues with .NET support entirely, it does open the door to us including specific .NET apps that work with a wide range of .NET framework versions in the Portable App Directory.  We're discussing it over in this PortableApps.com forum post.