As posted about last month, Google Chrome has today dropped support for Windows XP, Windows Vista, and Mac OS X releases 10.6, 10.7, and 10.8. New installations from the Chrome installer download will not work on machines with those operating systems. Existing users will see a message that they will no longer receive updates because their operating system is unsupportted.

If you attempt to install Google Chrome on Windows XP or Vista, the Chrome installer will download, run, install the Google Updater service and then show this error message: 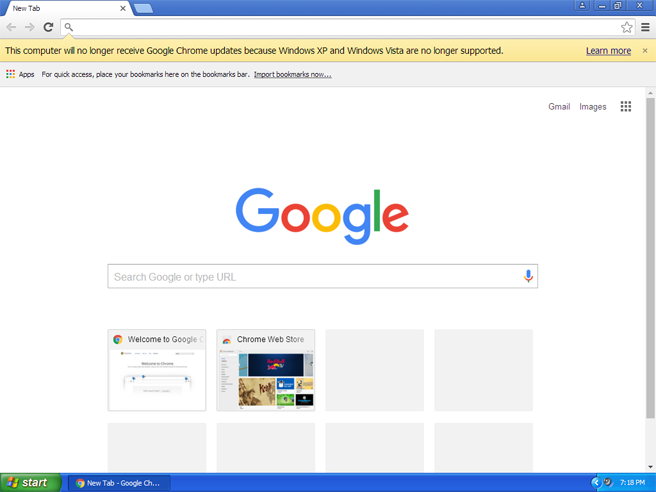 End users of Chrome running one of the versions of Windows or Mac OS X that is now unsupported should stop using their installed copy of Google Chrome and decide which option they would like to take. The first option is to upgrade to a supported operating system. For Windows users, that's Windows 7 or later. For Mac users, that's Mac OS X 10.9 or later. This could require an outlay of funds for the new operating system as well as for any necessary hardware upgrades like additional RAM. If feasible, users of these operating systems should upgrade regardless of whether they will continue using Google Chrome to ensure their systems stay secure.

The second option is to migrate to a browser that will continue to work on your system. The best option for that is Mozilla Firefox. Firefox continues to work on Windows XP and Vista as well as older versions of Mac OS X.  No announcement of an end of life has been stated for those platforms. Firefox performs similarly to Chrome on most systems and is highly customizable.

Whichever option you choose, now is the time to begin planning and implementing it. Otherwise you are at risk as Google Chrome 50 fixes a number of critical security issues that will soon be made public.